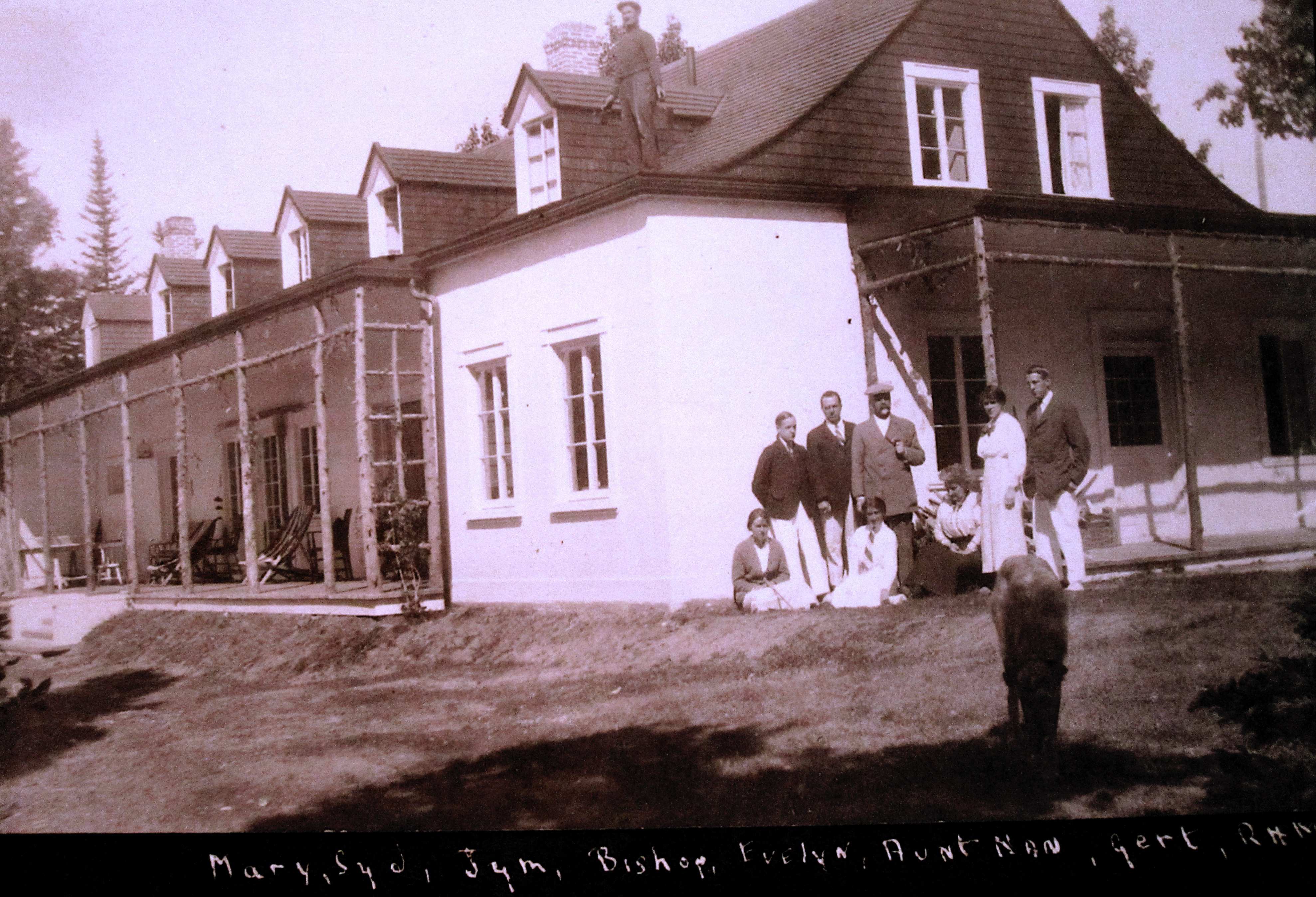 Our story begins with William Rhodes (1821‒1892). Born in England, Rhodes first came to Lower Canada in 1841 as a soldier. When he left the army five years later, he settled in Sillery, near Québec, where he married Anne Catherine Dunn (1823‒1911).

Rhodes quickly became an influential businessman. One of the founders of the Union Bank of Lower Canada, he also led several railway companies and invested in mining ventures. He played a major role in the political life of Canada-East and, later, of the province of Quebec as a Liberal deputy.

In the middle of the 19th century, Colonel Rhodes and his wife were introduced to Tadoussac by the Price family, who owned a local lumber mill. The Rhodes liked the area so much that they built a vacation home there in 1860, calling it Brynhyfryd (or “pleasant hill” in Welsh).

When this photograph was taken, the cottage had been enlarged and belonged to Nan Rhodes Williams (seated, on the right) and her husband, the Anglican bishop Lennox Williams. 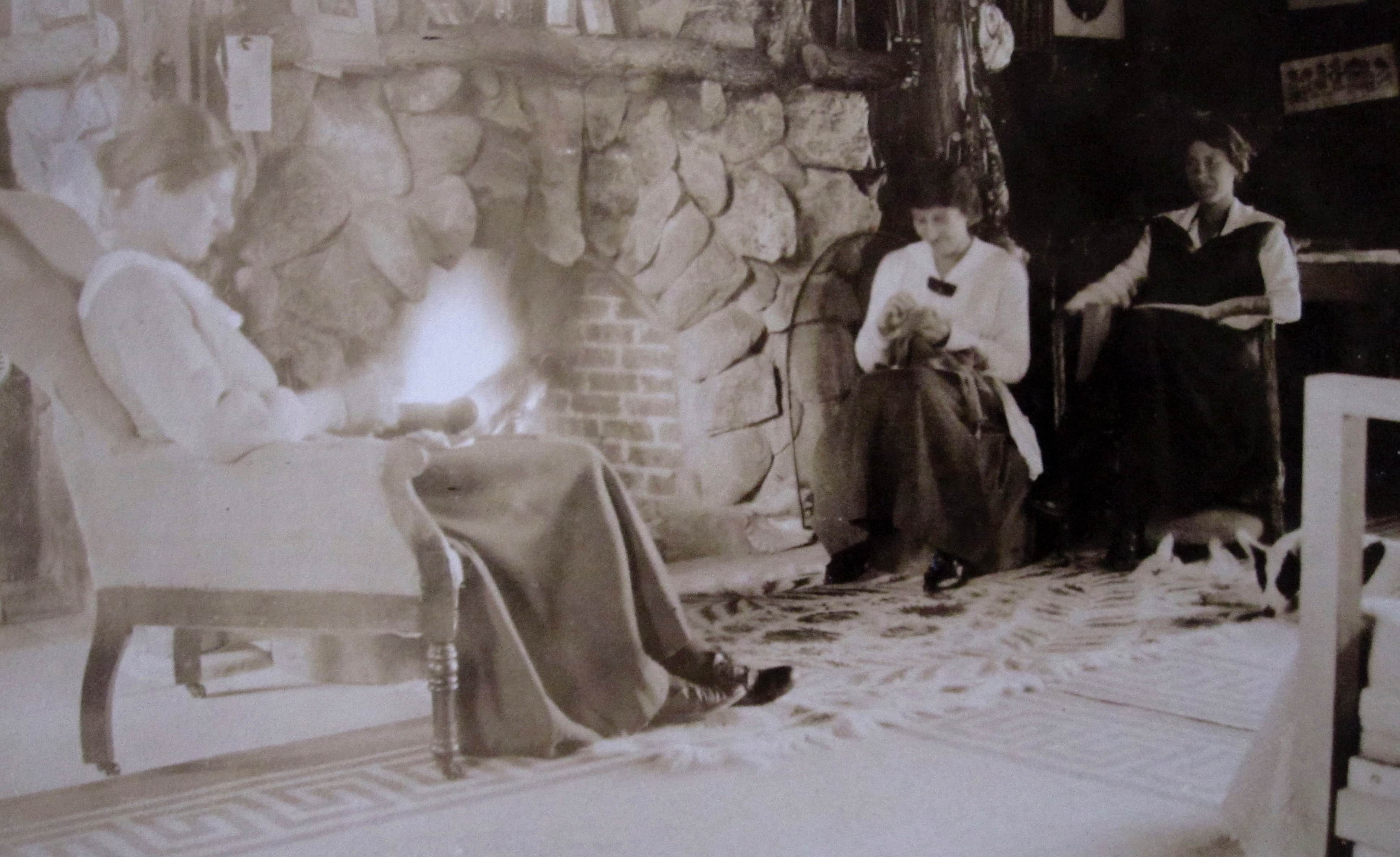 At Brynhyfryd, vacationers did not lack for comfort, even though electricity was not available until the 1940s.

The home’s interior decor was a reflection of rustic life. Nonetheless, numerous ornaments hung on the walls, the furniture, the mantelpiece and even on the piano. This was the style favoured in the Victorian era!

Brynhyfryd was enlarged several times over the years. It burned in 1932 and was rebuilt the following year. This new, bigger “cottage” could house all the family members and friends who faithfully returned to Tadoussac every summer, as it still does today. 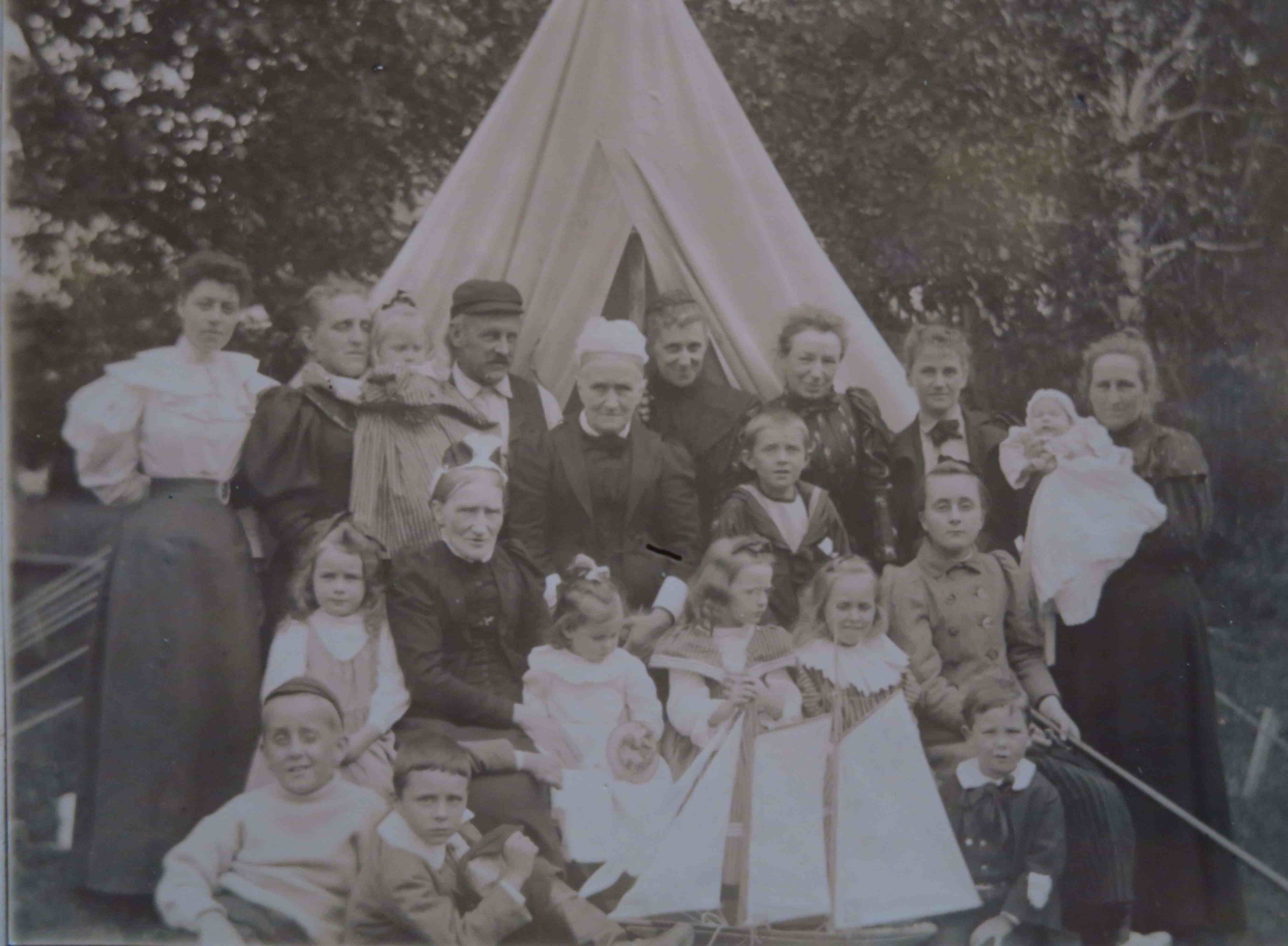 The elderly woman in the centre of this photograph is Anne Catherine Dunn. She is surrounded by members of her extended family (the Rhodes, Morewoods, Evans and Williams). Anne Catherine had nine children. Her descendants number in the hundreds and many of them still spend their holidays in Tadoussac today. 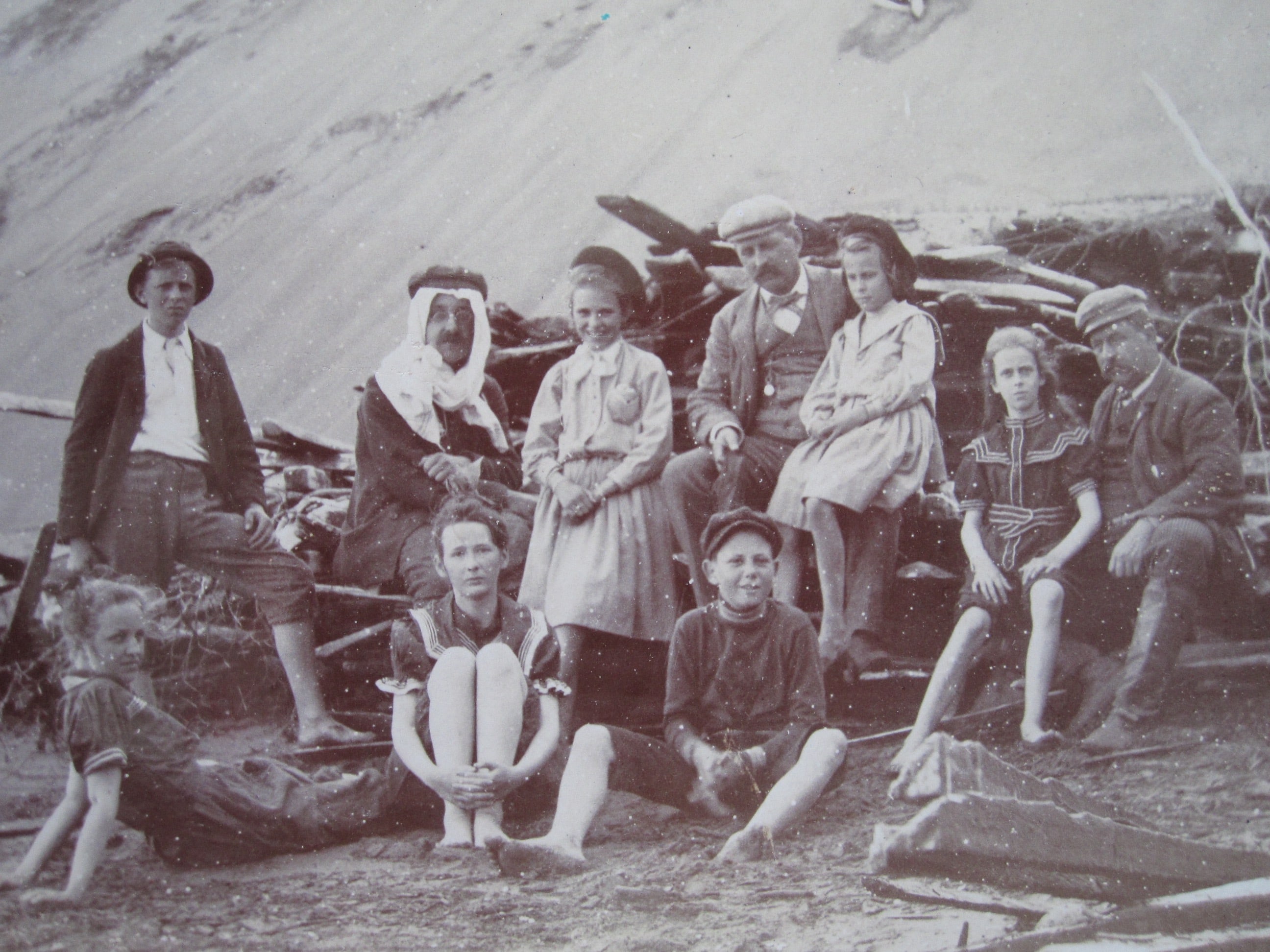 The dunes at Tadoussac

The summer residents of Tadoussac began exploring the surrounding area when they were still young. The abandoned Baude mill was a favourite spot for picnics. Nearby is a high dune reaching down into the St. Lawrence. From one generation to the next, vacationers of all ages have enjoyed sliding down the sand as if it were a toboggan hill, sometimes even on skis or sleds!

In this photograph, Francis and Armitage Rhodes (sons of William and Anne Catherine) are on the right, with their children and members of the Morewood family. 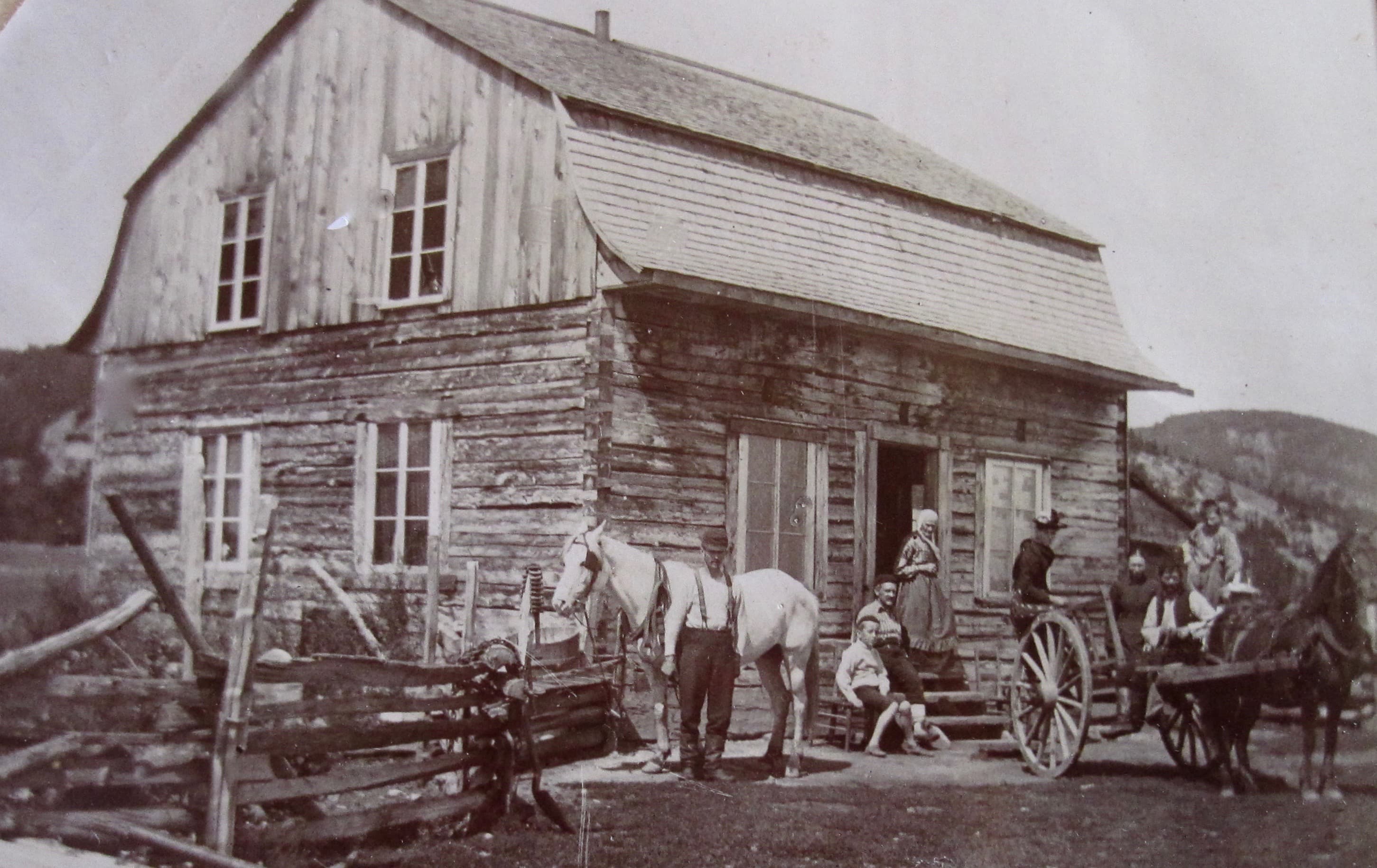 Visiting with the locals

William Rhodes often fished on Marguerite River, as did his friends who had built cottages nearby. This love of fishing was transmitted through the generations of the area’s summering families.

In this photograph, we see Godfrey (1850‒1932) on the steps of the Poitras house. A son of the first Rhodes to come to Tadoussac, Godfrey would later own Domaine Cataraqui in Sillery. In the Charlevoix, he enjoyed hunting trips with Mr. Poitras, owner of this log farmhouse.

Given the region’s abundance of salmon, fishermen would go door-to-door selling their catch cheaply. Salmon was a staple at the dinner table. Meals were often livened up with the addition of wild berries picked and sold by local children who would walk barefoot from one prospective customer to the next. 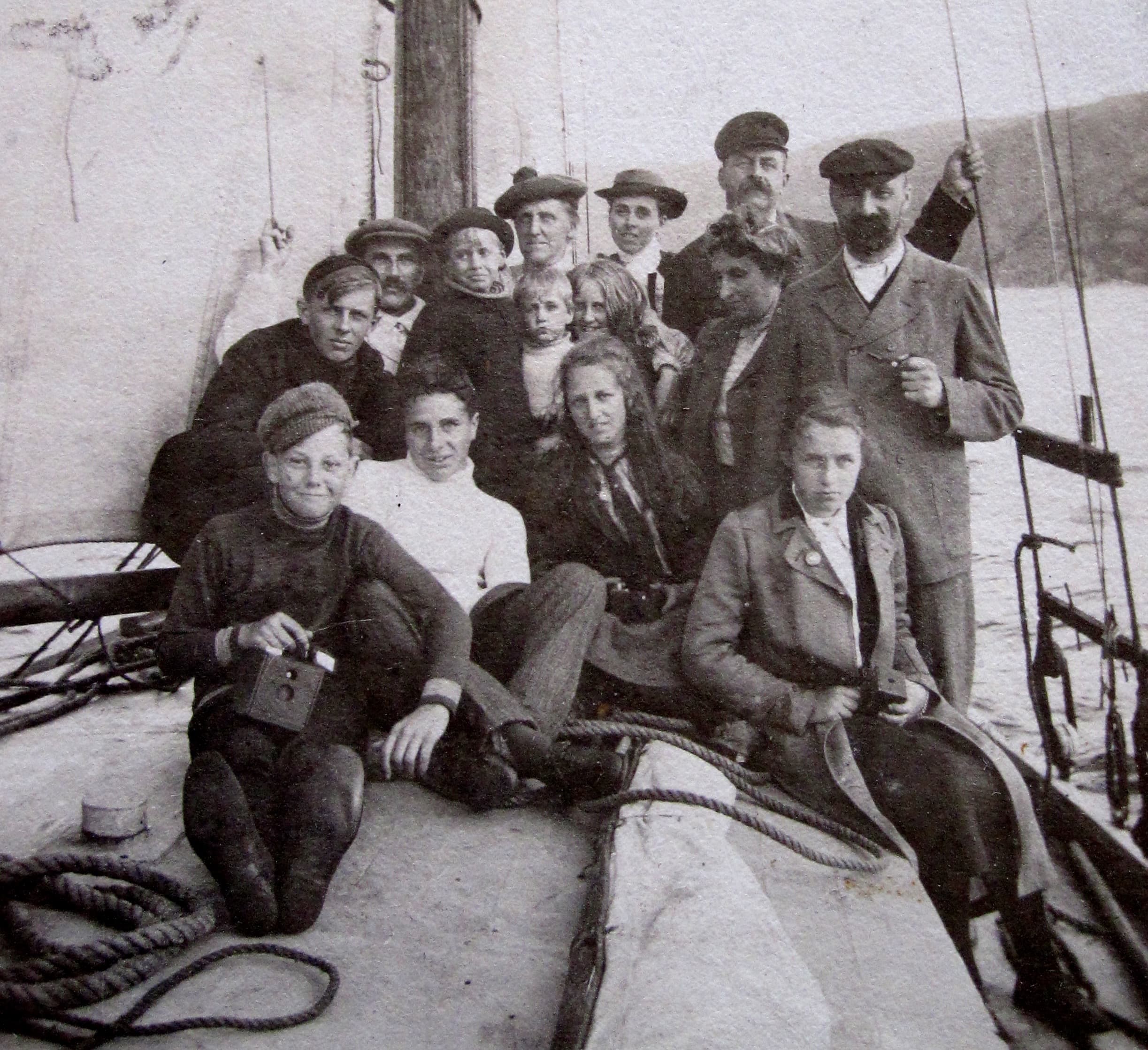 In Tadoussac, sailing was a passion many summer residents shared. Some owned their own boats while others rented them or paid for short excursions. “Benny” Caron was one of the boat-owners who took passengers out on his 40-foot yawl, Laura.

In the 1920s, the daily rate to rent a sailboat excursion, including meals and the services of the captain and a crew member, was about $20. Even in those days, it wasn’t expensive—for those who could afford it, that is!

This photograph shows members of the Morewood, Campbell, Rhodes, Williams, and Wallace families. Note that three of the young people in front are holding portable cameras. 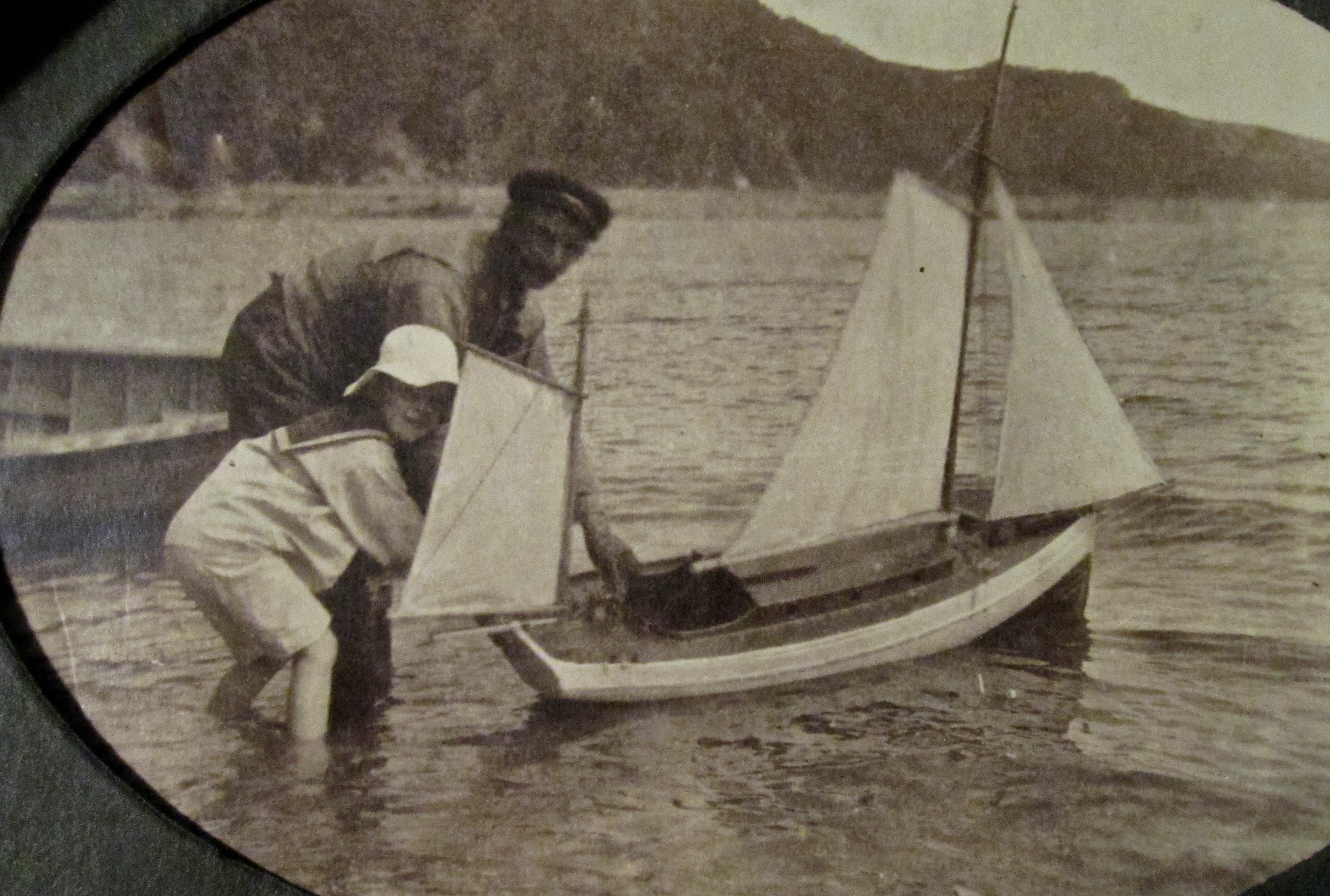 The child in the photograph is Robert Lewis Evans (1911‒1988). He is launching a beautiful model of a Lower St. Lawrence yawl, built by Majorique Gagné.

Lewis Evans’ father employed Majorique to do maintenance work at the family’s summer home and to assist in hunting and fishing trips. As a child, Majorique had been a water-carrier at the summer residence of Lord Dufferin. His wife also worked for the holidayers, as a washerwoman.

Lewis Evans spent every summer of his life in Tadoussac. An English teacher, he loved to write and he turned out several adventure stories. He also eloquently described the history of the Tadoussac summer colony in Tides of Tadoussac: The Golden Age of a St. Lawrence River Resort (1982). His connection to the Rhodes family solidified in 1944 when he married a Rhodes descendant, Betty Morewood

Among the sailboats owned by Robert Lewis Evans in his lifetime was Bonne Chance, an old Lower St. Lawrence yawl. A sail in the stern makes the yawl very easy to handle.

Lewis Evans not only loved to sail his boats, but also to maintain and repair them, with the help of expert local carpenters and caulkers. In this, he followed in his father’s footsteps, and his children would continue the tradition. For that matter, Bonne Chance still exists, dry-docked at Tadoussac, waiting to sail again. 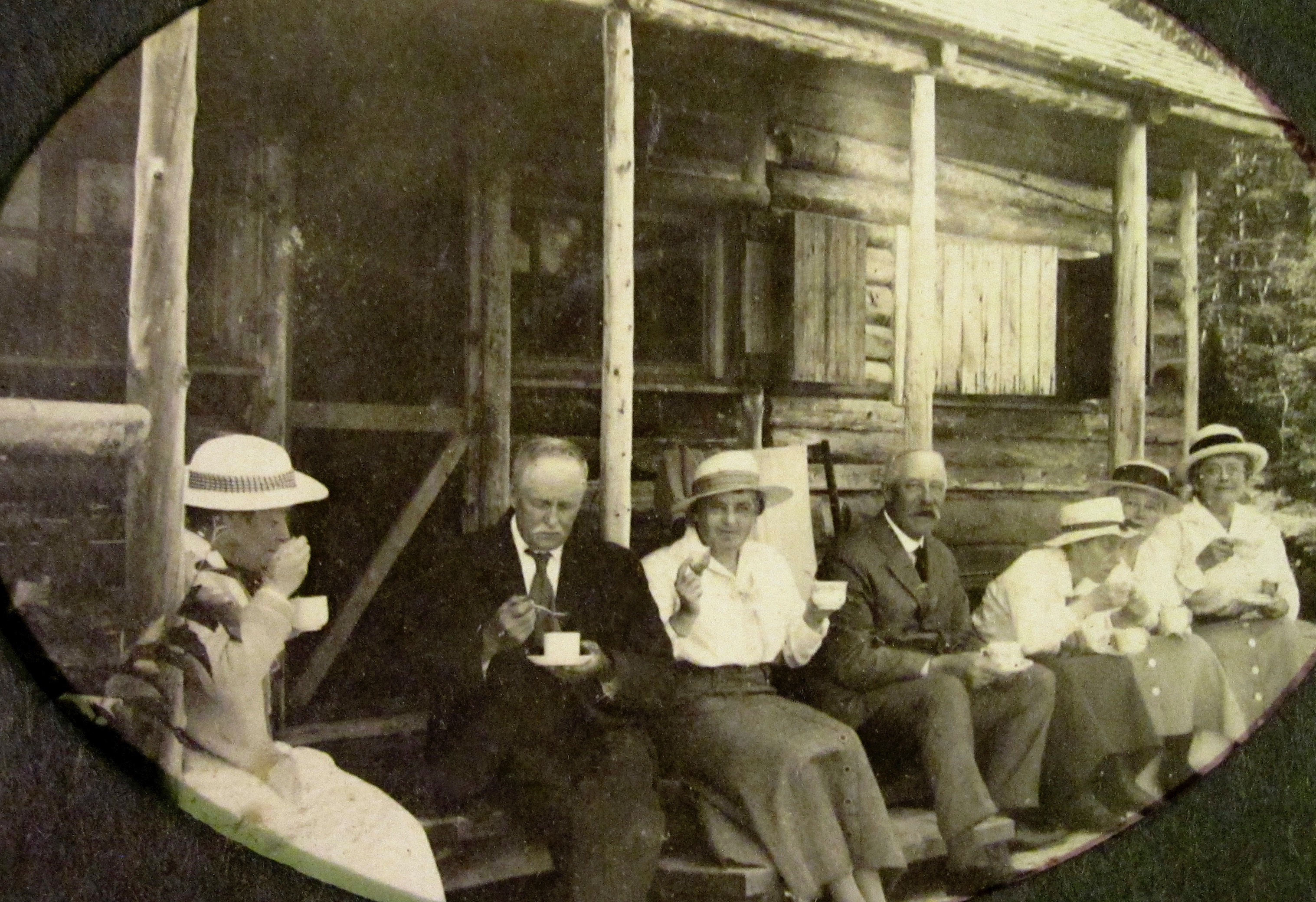 The camp at Cap à Jack

This wilderness camp was built around 1900 by Dean Lewis Evans on a rocky overhang some 25 feet above the Saguenay River. Only accessible by boat, it was the ideal spot for fishing in absolute tranquility. It had a simple construction with just two bedrooms, one for men and the other for women.

When motorboats became more common during the 1920s, the camp was vandalized. Repeated measures to protect it from break-ins proved useless, and the family eventually gave up and dismantled it.

Many children enjoyed their time at the camp. It was safe place to learn to fire a shotgun—truly an unforgettable experience! 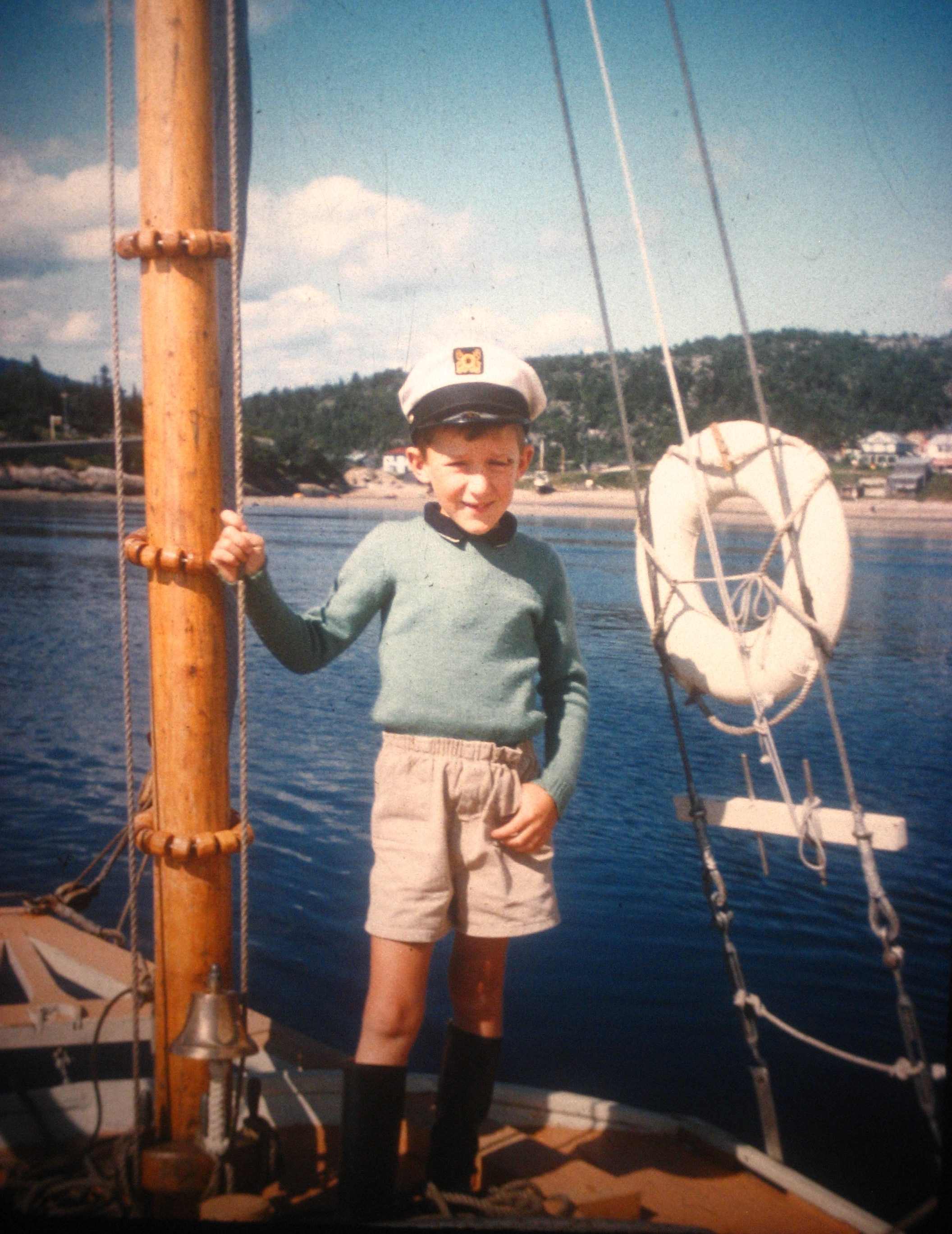 The boy posing proudly here is Tom Evans, the creator of the website Tides of Tadoussac, which chronicles the history of the Tadoussac summer colony in photographs.

Today, there are more than 40 summer residences at Tadoussac, many of which are owned by Rhodes and Evans descendants.

In the 1930s, the inauguration of a ferry between Baie-Sainte-Catherine and Tadoussac ended the isolation of the little summer colony. The possibility of reaching Tadoussac by car freed people from making the 20-hour (or more!) steamer trip between Montréal and Tadoussac. And it brought in a new era, as vacationers came for shorter stays in their summer homes or area hotels.

Notable fact: Wearing shorts was forbidden by the Tadoussac town council until the 1930s!