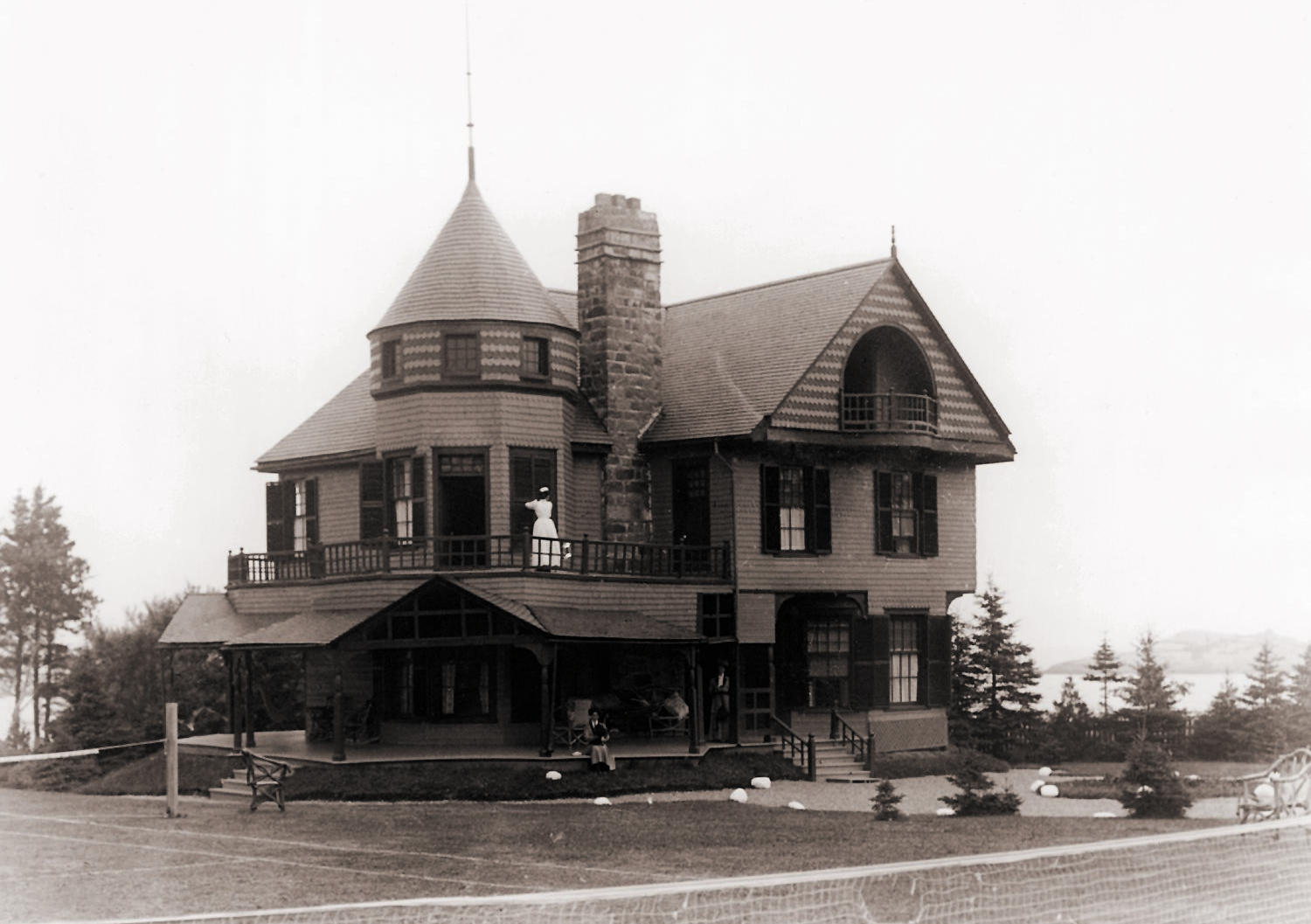 Today, the Reford family is often associated with the famous gardens in Grand-Metis that Elsie Reford began in 1926 on a huge estate at the mouth of the Mitis River. Less widely known, the Refords also owned an impressive summer residence at Little Metis, a few kilometres east of the river.

Designed by Scottish-born architect Andrew Thomas Taylor for Robert Reford Sr. (father of Elsie’s husband, Robert Jr.), the villa was built by a local contractor in 1888‒1889. Born in Ireland, Robert Reford Sr. was a pillar of the Montréal business community, mainly active in maritime shipping. He also served on several boards of directors, including for the Bank of Toronto and Lake of the Woods Milling. He lamented his irregular visits to Métis.

The entirely wood villa was built in the Shingle style, which was popular in the United States at the time. The choice of materials (thinly cut cedar shingles) and the originality of the design (each façade is different) display this influence.

Robert Reford’s decedents frequented this summer villa until it burned in 1976. 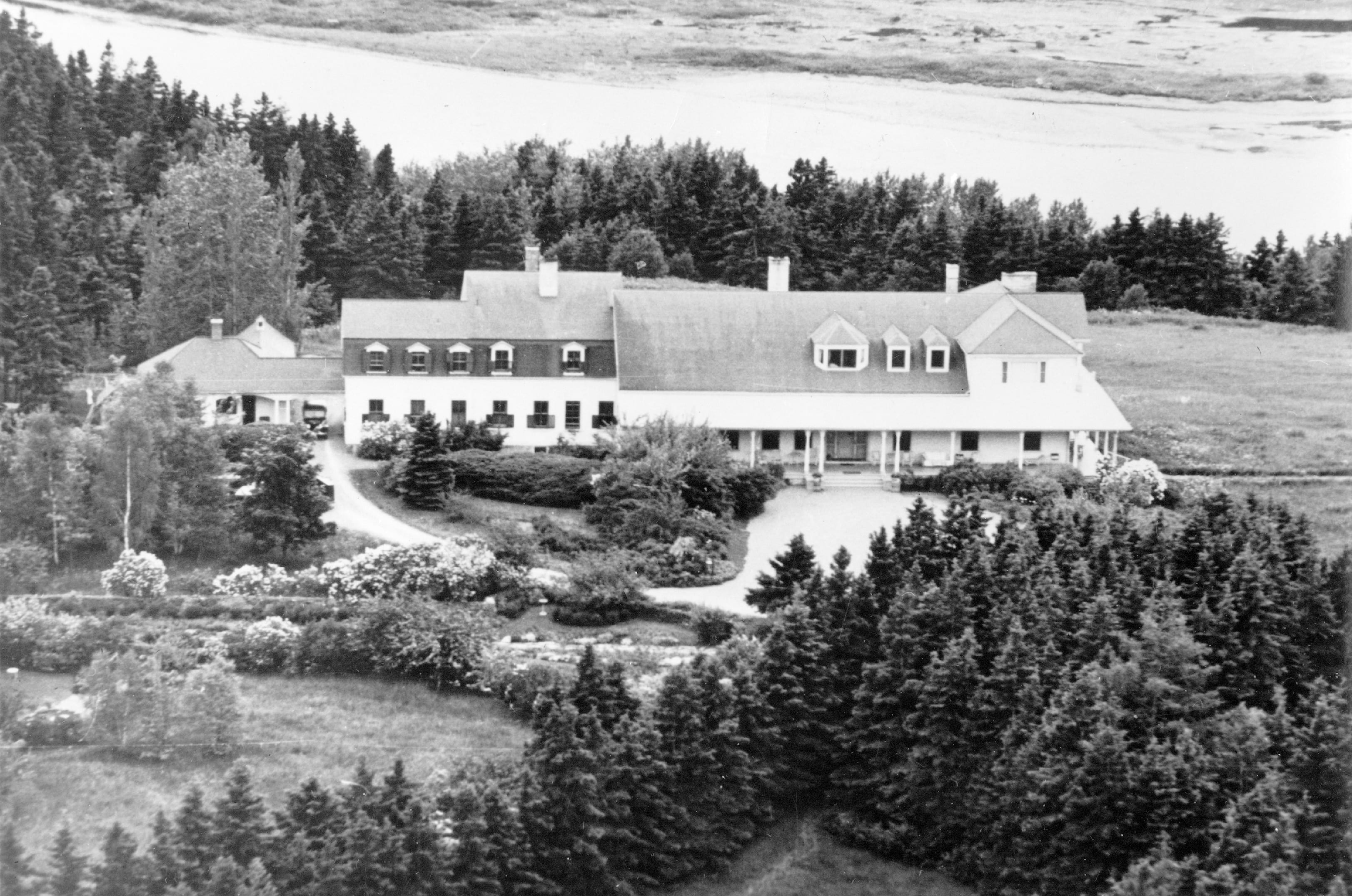 In 1850, the young Scot George Stephen immigrated to Canada. His sharp business sense first shined through in the textile trade. On the board of directors of the Bank of Montreal, he then became the bank’s vice president, and finally, president. Stephen is remembered as a pioneer of Canada’s railway system.

Like many of his fellow countrymen, Stephen was fond of salmon fishing. After owning a fishing camp in the Gaspésie’s Matapedia Valley, he bought the old seigneury of Grand-Metis in 1886. The following year, he had Estevan Lodge built on the banks of the Mitis River. This is where he received many illustrious visitors and continued to indulge in his favourite sport.

After the death of his wife, Stephen (by now Lord Mount Stephen) loaned the villa to family members and friends. In 1918, however, he gave it to his niece, Elsie Reford, who had spent her holidays there since the beginning of the century. Numerous photographs give us glimpses of the Reford family’s activities in Grand-Metis, away from the busy life of Little Metis. 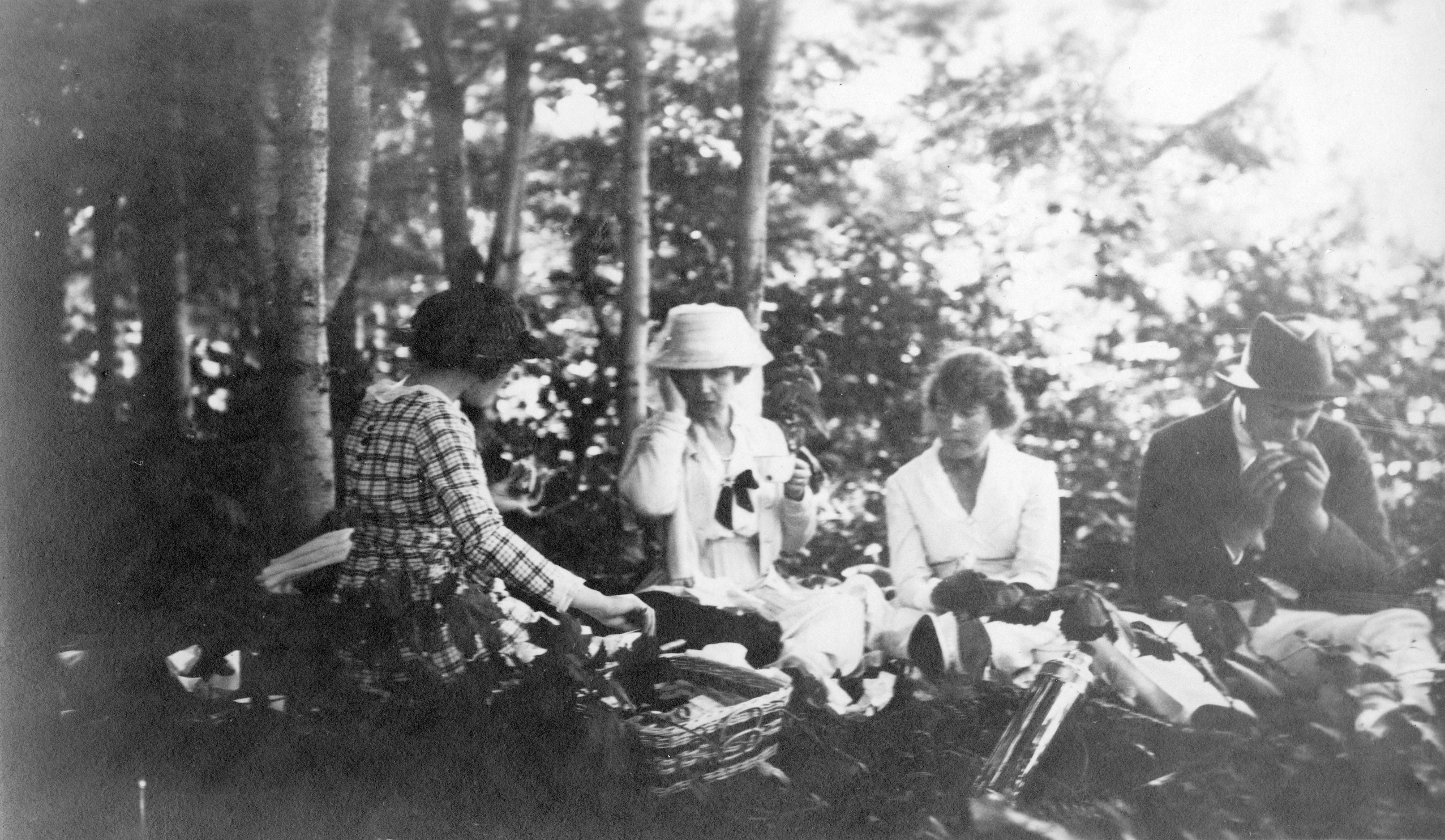 Mary Elsie Stephen Meighen (1872‒1967) was born in eastern Ontario, but lived for most of her life in Montréal. Her father, Robert Meighen, born in Ireland, was a prosperous businessman, president of Lake of the Woods Milling (the largest milling company in the British Empire) and a close colleague of George Stephen’s.

In 1895, Mary Elsie Stephen Meighen became a Reford when she married the son of Robert Wilson Reford (1831‒1913), who owned a summer residence at Little Metis. Her husband Robert, named after his father, was a mainstay in the family business of rice milling and shipping. He was also a photographer and an amateur painter.

Elsie and Robert Jr. continued the family tradition of spending holidays at Grand-Metis, specifically, at Estevan Lodge. This was their base for enjoying numerous outings, such as picnics, like the one shown in this photograph, riding, fishing and hunting. 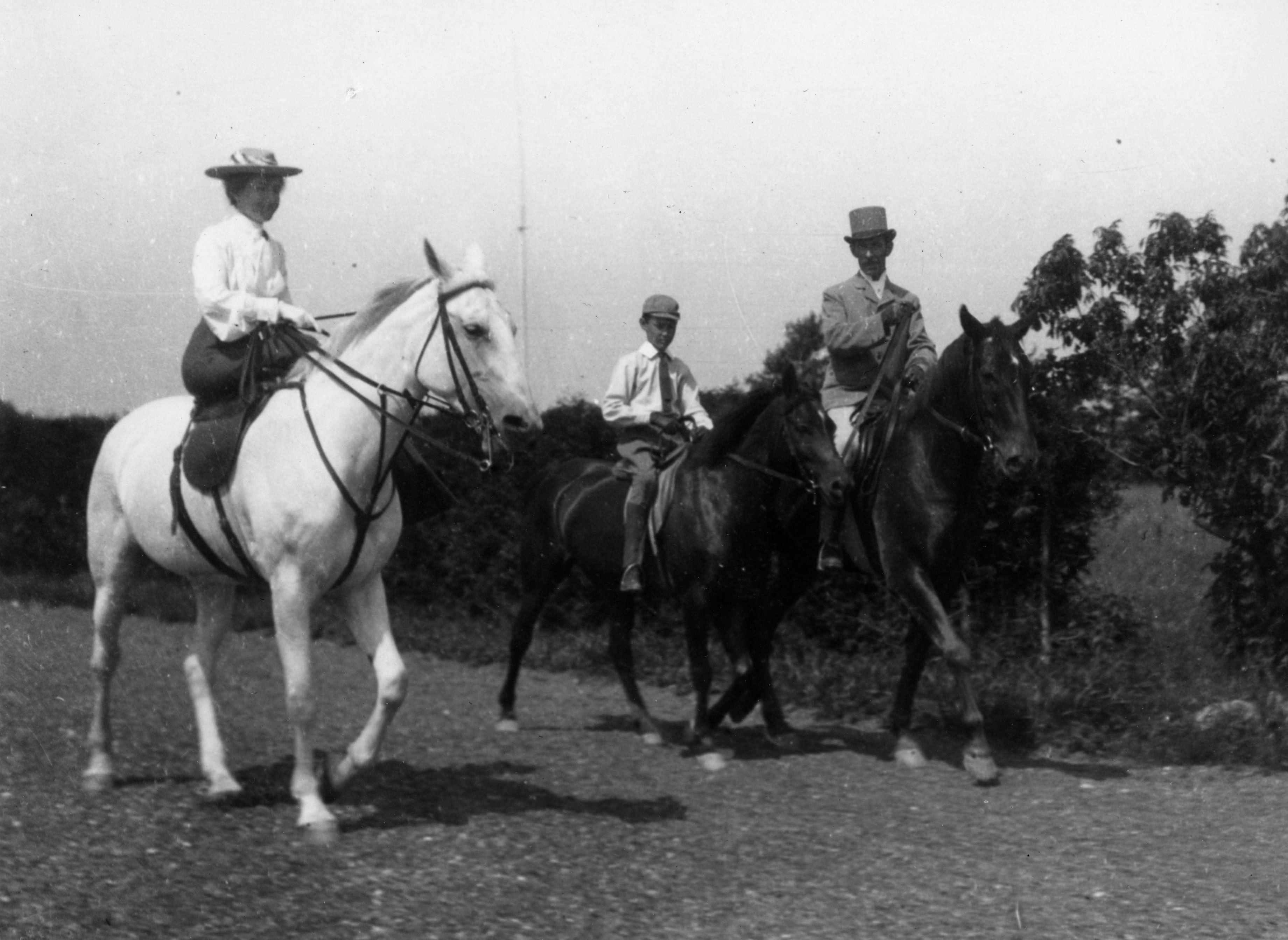 Elsie Reford was an avid horsewoman. She would bring her horse whenever she went to stay in Metis. Elsie mounted side-saddle (both legs on one side), which allowed her to ride in the feminine dignity of a long skirt. 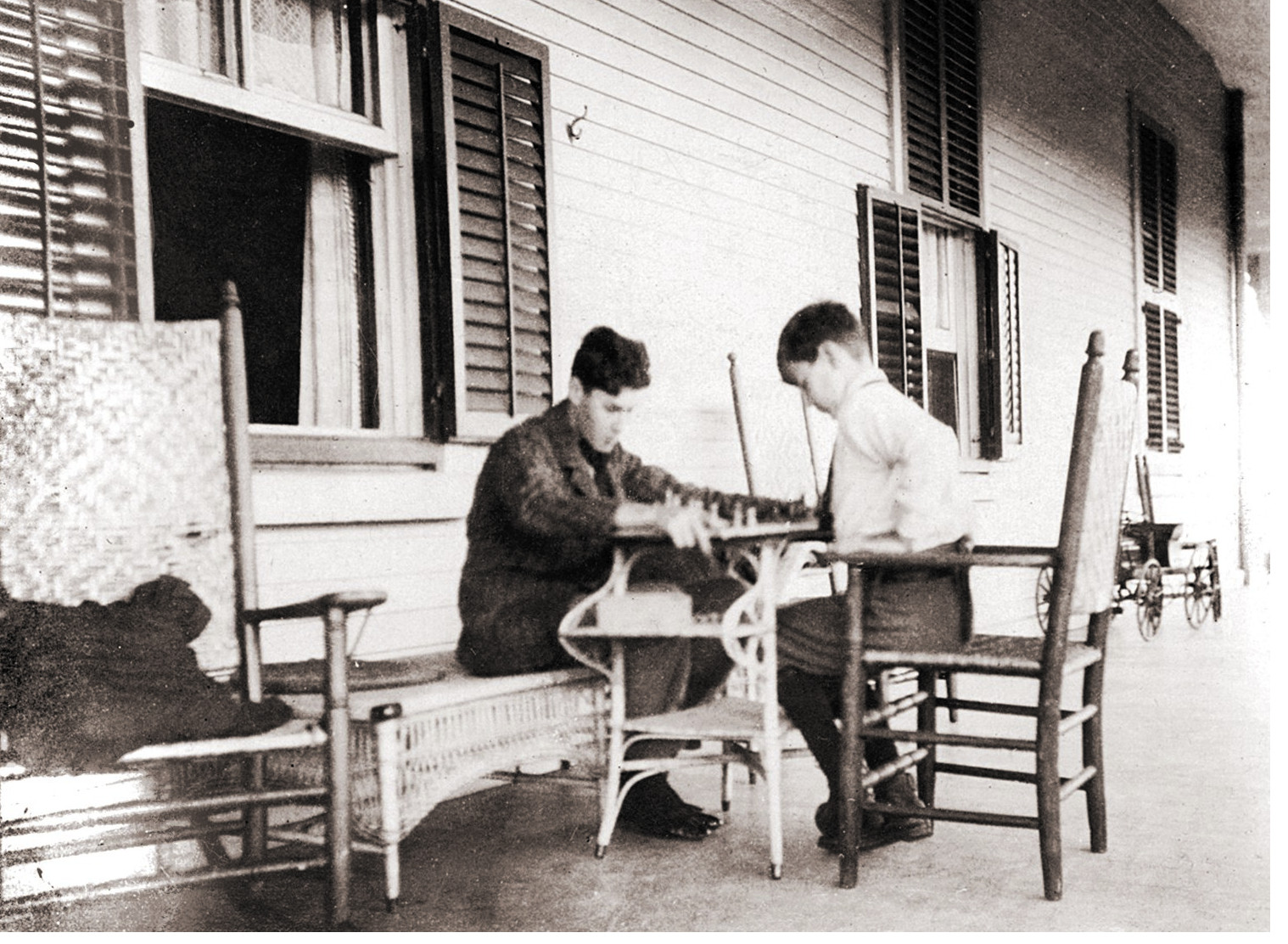 When it looked like rain, it was better to stay home. While the adults watched boats passing on the river through a telescope and the children pushed their dolls and carriages about the house, the adolescents played chess. Even if no visitors were expected, it didn’t mean the younger set could dress casually: neckties were the order of the day! 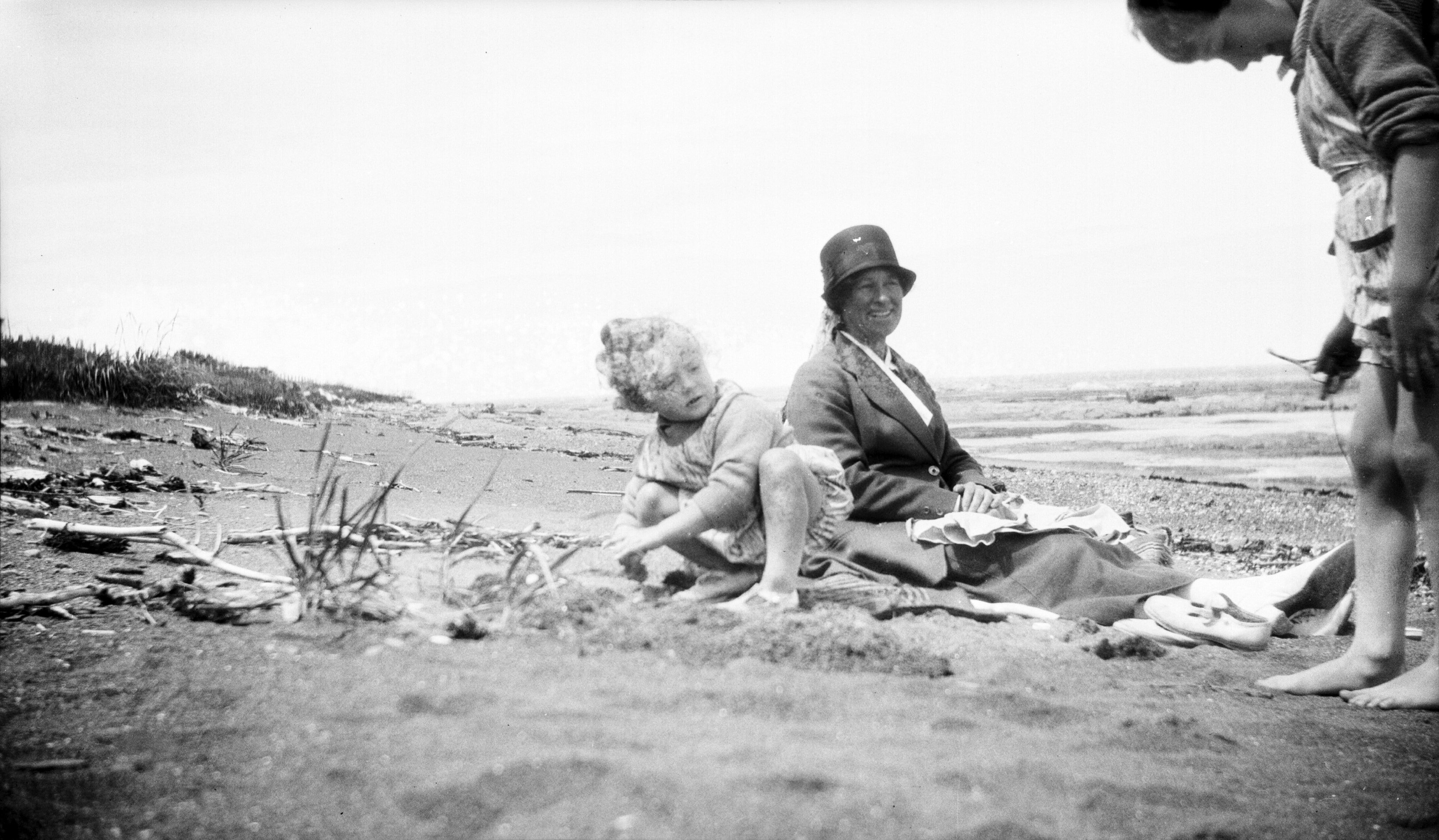 Nelly, the nanny, took care of the children of Bruce and Evelyn Reford, while the adults went about their business. On the job, Nelly kept her high-button boots even on the beach! 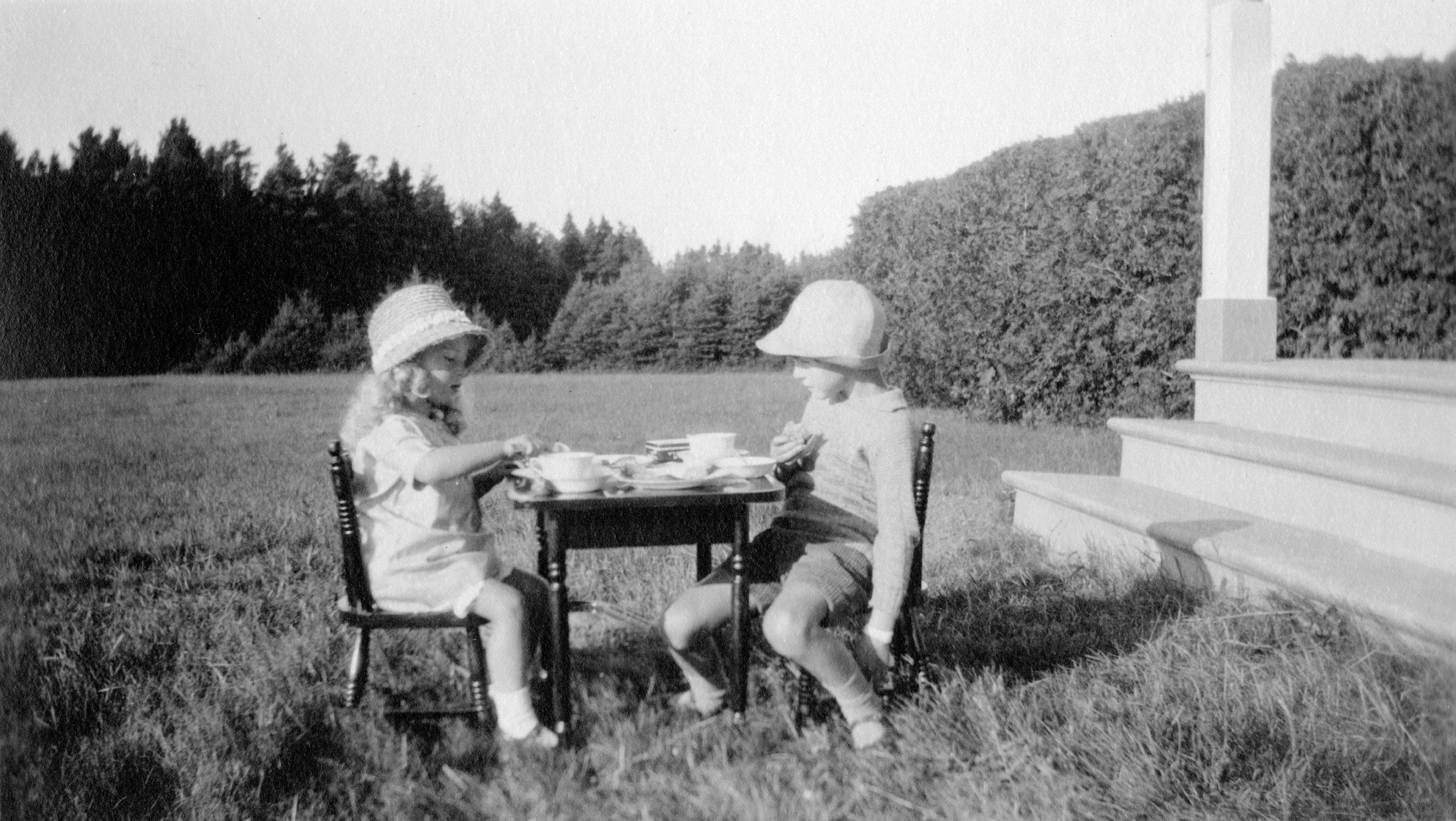 The children loved their holidays at Estevan Lodge too. They learned to drink tea at an early age, mixed with a lot of fresh milk!

Far from the city, the children created a holiday world of their own. They surely couldn’t have imagined their playground would be visited years later by tens of thousands of people! 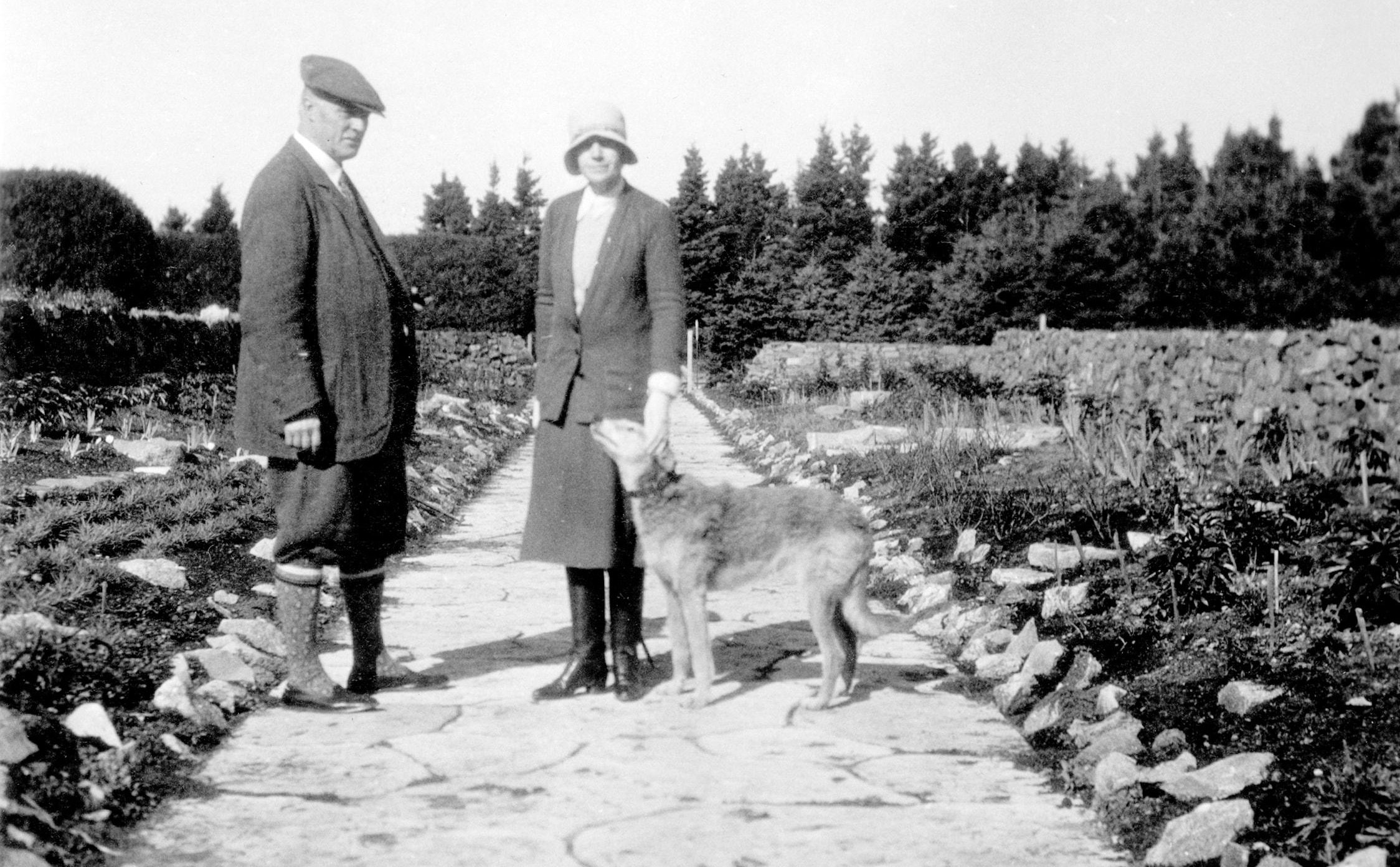 Between 1926 and the early 1960s, Elsie Reford turned the land around the fishing camp into a garden unique in North America. At first, everything seemed to work against her: the poor soil, the harsh climate and the exposure to the wind. She learned how to get the most out of the site’s topography, however, studying the varieties suited to the region and the ways to grow and multiply them. All this was done with the help of gardeners she trained herself. Elsie defied the convention of the times, which dictated that wealthy landowners hire highly reputed landscape architects for such tasks.

We see her here in the Long Walk of the gardens, accompanied by her husband and their dog. The “Long Walk” is probably an allusion to a famous alley that leads to the Windsor Castle (United Kingdom). This was significant since Elsie came from a long line of conservatives loyal to Britain: the Meighens (her father’s family), the Stephens (her maternal uncle’s family) and the Refords. Moreover, several governors general—the representatives of the British crown in Canada—also visited Estevan Lodge over the years. 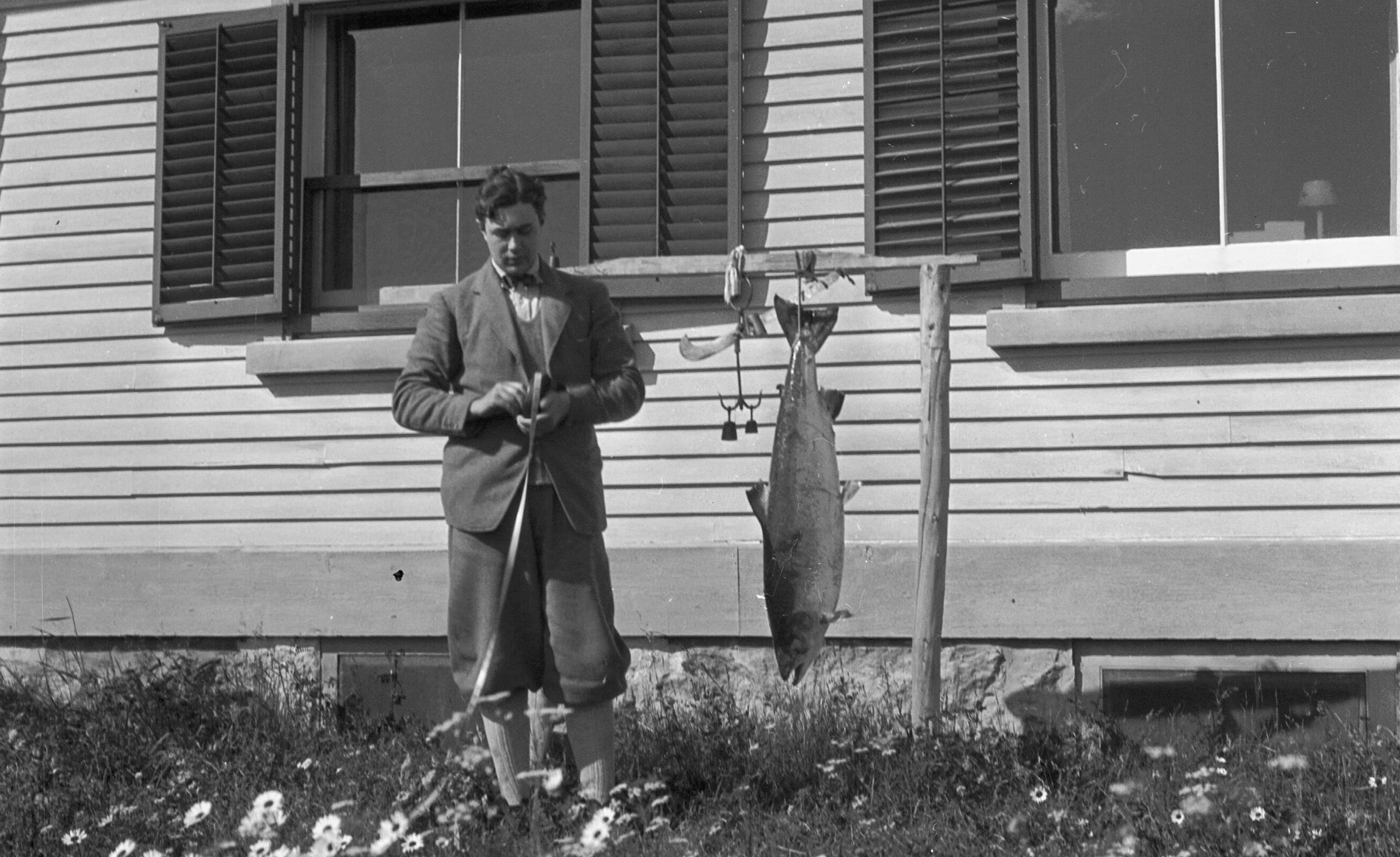 Salmon, then and forever!

Elsie and Robert Wilson Reford’s children and grandchildren were growing up! Here, their son Eric poses with his whopping catch. Like his great uncle Stephen, his grandparents and parents, he loved salmon fishing. And, also like them, he would weigh and measure his prizes.

Estevan Lodge remained the family’s private property until 1961. The gardens were opened to the public the following year. The Government of Quebec was the first purchaser, followed by Les Amis du jardin de Métis, who took it over in 1995. Today, Elsie’s great-grandson, the historian Alexander Reford, is the director of Reford Gardens. He oversees the conservation, restoration and development of the Gardens, whose reputation has spread well beyond Quebec.

Many of Robert Reford’s descendants have continued the tradition of vacationing at Little Metis, particularly, the MacDougall, Price and Pitfield families, who have spent their holidays in the village for more than 125 years